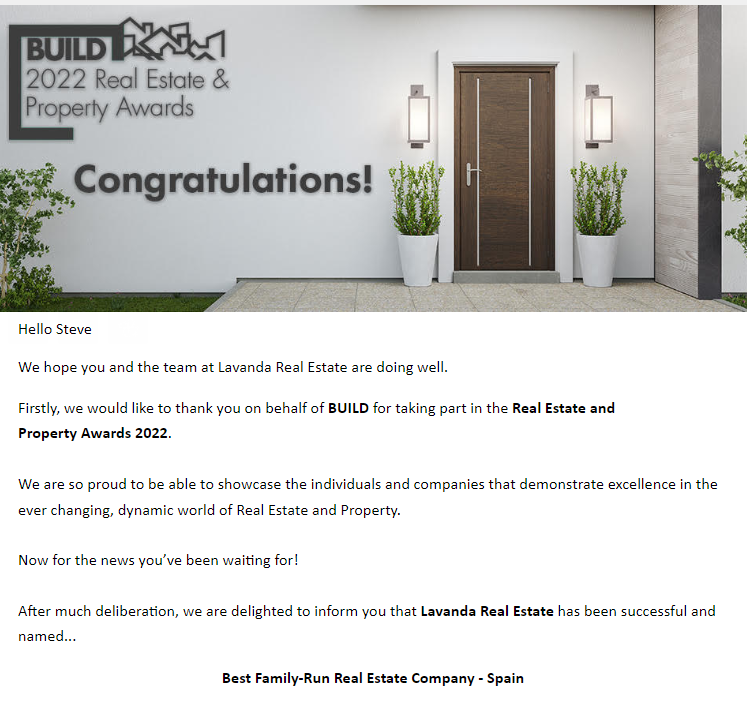 So proud! We kept it as a secret, but now it's official.
This year Lavanda Real Estate SL was in the running to win one of the awards of BUILD MAGAZINE for real estate agents in Spain and guess what... WE WON! The winning graphic logo will be on our website as soon as possible
Winning one of the Real Estate and Property Awards 2022 will provide you with the evidence you need to prove that without doubt, you stand out from the crowd. Boosting your victory with visual reminders helps to increase the reputation of your brand and allows for you to market your company further. This can in turn, attract new employees, as well as new clients, looking to work with the absolute best in the industry! This awards programme remains a core part of BUILD’s extensive awards programme portfolio. Our aim as always is to give recognition to the key professionals of this lucrative and ever evolving industry. Public transport on the Orihuela Costa offers such exceptional value, that it provides an inexpensive and genuine alternative to car hire when visiting the Costa Blanca.Locally the public transport service on the Orihuela Costa is provided under the signature identity of "Costa Azul” and operated by the international public transport company Group Avanza (headquartered in Madrid)Operating a fleet of more than 1.800 modern buses throughout the Iberian peninsula, public transport and bus services form a route from Alicante-Elche international airport to local urbanisations and communities.A premium bus service runs between the airport and the port city of Torrevieja, with scheduled coaches linking the two destinations every day of the year including Sundays and public holidays. The luxury coaches offer a free on-board wifi connection for passengers, and travel along AP-7 toll motorway to avoid the notorious congestion on the N-332 coastal road that can cause serious delays to journeys during the summer months.With a scheduled journey time under 50 minutes, a regular timetable, and an adult ticket cost of just 7€, the service offers unbeatable value.Two regular public transport services connect Torrevieja with Orihuela Costa, using the University Hospital of Torrevieja as a connection hub.The Pink Line DF provides connections between the city, Punta Prima and Los Altos, whilst the Aqua Line E provides a local bus service between Torrevieja, Los Altos and Lago Jardin.Both lines operate a regular service timetable seven days a week, with ticket prices at a very affordable 1,35€. Two special public transport services supplement connections around the local area, with busses serving stops between Torrevieja Hospital and La Zenia Boulevard (shopping centre), and a separate southbound coastal service covering communities between La Zenia Boulevard and the health centre in Aguamarina (Cabo Roig). Special service bus routes operate only Monday – Friday, with no scheduled services for the weekends or public holidays.Costa Azul offers discounted tickets on their airport transport coach service. Children under 4 years travel free of charge, and residents over the age of 65 are eligible for a 30% discount on ticket prices upon presentation of a valid Spanish residence card, bringing the price comfortably under 5€ per person. Bus tickets to Alicante-Elche airport are available for purchase from Torrevieja Bus Station (Estacion de Autobuses de Torrevieja), or you can book them online and pay with Visa, Marstercard or Paypal.Alternatively, at Alicante airport you’ll find the bus stop on level 2, simply pay the driver as you board the bus. To contact Torrevieja Bus Station call +34 965 710 146, or to book tickets online just go to their official Avanza Group website.

Spain guarantees residency for 400.000 Brits even with hard Brexit The Spanish government has brought in a Royal Decree of contingency plans to outline the rights of Britons resident in Spain in the event of a no-deal Brexit.

The measures, which were formally announced on Friday, included the guarantee that those Britons legally resident in Spain on March 29th would be offered new permanent residency papers.

Announcing the Royal Decree, Foreign Minister Josep Borrell told a press conference in Moncloa that the measures were designed as a contingency plan "in case Britain leaves the EU without securing a withdrawal agreement.”

"It will assure the continued rights of those British living in Spain,” said Borrell adding that " although it is unilateral measure passed by Spain, we expect that it will be met with reciprocity by the British government. "

The measures state that "around 400,000” British nationals would be eligible for the new residency status even if the UK crashes out of the EU without ratifying a withdrawal agreement.

The only requirement will be that they have to apply for a new foreigner identity card, sometime before December   2020.

"The process will be nearly automatic,” for those who already have permanent residency, according to the text.

The decree extends the rights of British citizens currently resident in Spain and covers issues such as healthcare, driving     pensions/social security.

All of which will be guaranteed during "a transition period” lasting until the end of 2020.

As well as guaranteeing access to healthcare for those with S1 certificates, the new decree will also allow British tourists to receive emergency care in Spain if they are in possession of an EHIC card.

The law will come as a huge relief to the tens of thousands of British pensioners living on the Spanish   who rely on access to local hospitals and doctors.

Campaigners who have been fighting to protect the rights of European citizens post-Brexit described the new law as "positive".

"EuroCitizens welcomes the publication of the Royal Decree today by the Spanish Government, which will clarify the situation of the 314,000 Britons in a no-deal scenario," the organization's chair, Michael Harris told The Local.

"We will   the text in depth to see the implications for different groups of UK residents. Next week, we are having a meeting with civil servants from various Spanish ministries and we will follow up on any queries that might arise."

The measures are designed to limit any damage Brexit might do to its tourism industry which is the second largest sector of the economy. Last year, 18 million British tourists came to Spain.

Flights between Britain and Spain will not be affected by Brexit for a year as the present EU deal on air travel will continue.

The text of the decree also discusses the status of the approximately 9,000 Spanish workers who live in Campo de Gibraltar and cross into the Rock every day and guarantees freedom of movement over the border.

But the government stressed that it is a "unilateral” measure and requires reciprocity from the British government to ensure Spanish citizens resident in Britain can enjoy the same rights.

The royal decree states that if there is no reciprocal agreement within two months then the cabinet can suspend it.

After being given the   by Pedro Sanchez’s government on Friday, the decree will need to be sent to parliament for approval.

Luckily, the measures have cross-party support as the Spanish parliament will be suspended next week to allow campaigning ahead of the election on April 28th so it should be passed into law without problems. 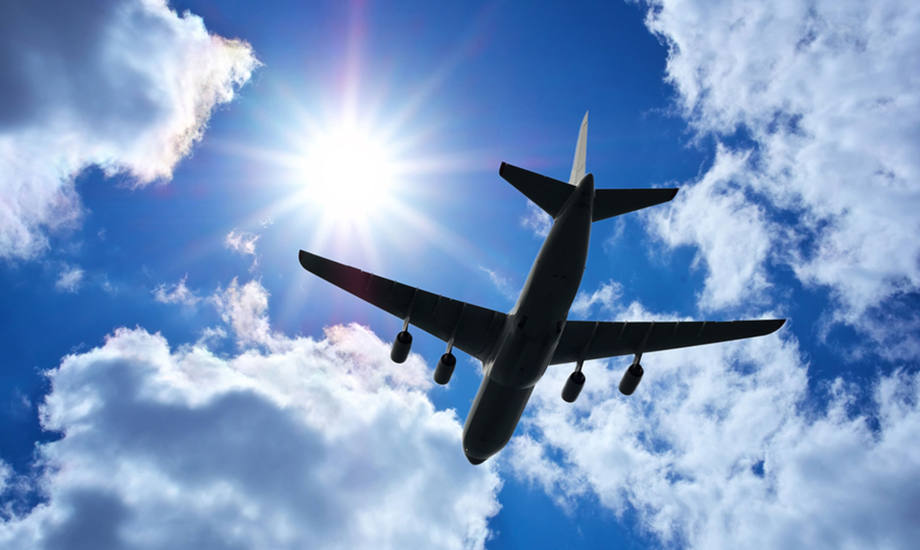 There are a number of flight routes and airlines that have already announced plans to fly in and out of Corvera Murcia airport. As the airport will replace San Javier airport and will also be run by AENA, it is largely expected to cover most, if not all of the existing routes dealt with at San Javier, but with the additional scope to handle many more routes too.

For a complete list of destinations from Murcia Corvera Airport see below: